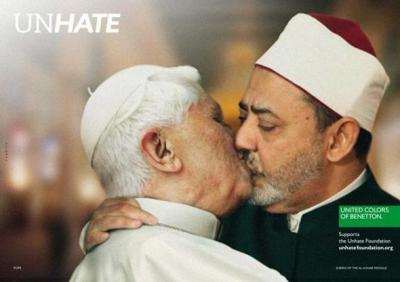 Advertising: Kissing Pope is unacceptable for the Vatican

Benetton has caused quite some commotion once again with her new campaign UNHATE. The campaign is based on polar opposites in the world, who greet each other intimately. Benetton hopes to contribute to greater tolerance between people and an end hatred between nations, ideologies and religions. The campaign features, six manipulated and edited photos of world leaders kissing each other. Including the Pope with the Islamic spiritual leader Mohammed Ahmed el-Tayeb, Barack Obama with his Venezuelan colleague Hugo Chavez and Benjamin Netanyahu with Mahoud Abbas .

The Vatican was 'not amused' and at the behest of the Vatican the image of the kissing Pope kissing is withdrawn from the campaign.

Famous people generate a lot of attention, but may their image be used whenever one pleases? The answer is no. Often (think athletes and artists) there is a financial interest, but it could also be that the person does not want to be associated with the product or that the expression suggests that the known person supports the ad or contributed to it. In particular, with manipulated images there is a danger. Use of famous people still fun and exciting, but not without risks.