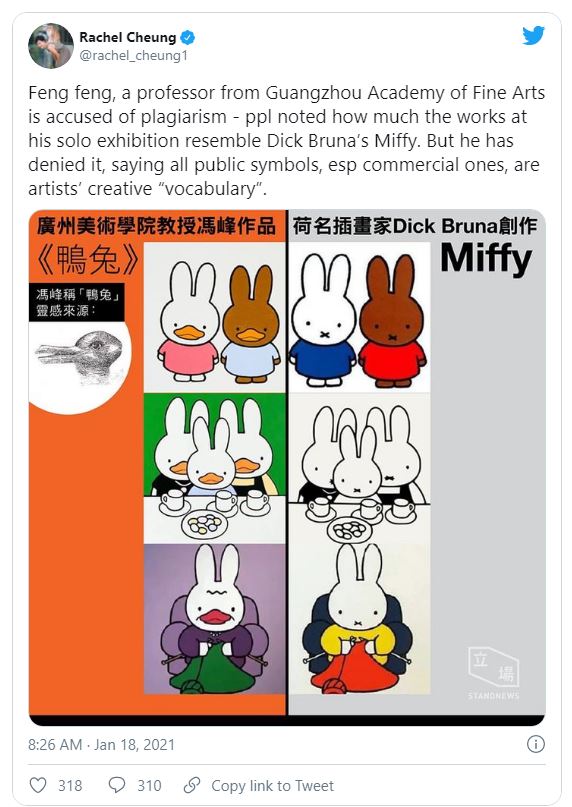 An online row occurred in China about an exhibition of Feng Feng’s paintings. Stylized rabbits with a duck beak, strongly reminding of Dick Bruna's Miffy. The artist rejects accusations of plagiarism because commercial symbols are part of the public domain. How would we regard this in Europe?

Works of visual art are protected by copyright. The threshold for copyright protection is that it must be an intellectual creation of the author (creative choices have been made). When asked whether this is plagiarism, one checks whether protected characteristics were copied. For the overall impression is considered if sufficient distinction has been taken from the original work. There is no "inspiration" here, this is plain plagiarism in my opinion.

Then only one escape remains, namely the parody exception. The ECJ has ruled that there must be a clear difference from the original and that the parody aught to be humorous / mocking. Miffy has previously run into a parody defense at the Amsterdam Court.

This court ruled that a coke-snorting Miffy was allowed. That was clearly a parody because of the great contrast with Miffy, tantalizing text and because as a whole it inspired laughter. The humor is not obvious to me this time, but maybe I am a little too attached to Miffy. (Source image: Twitter)