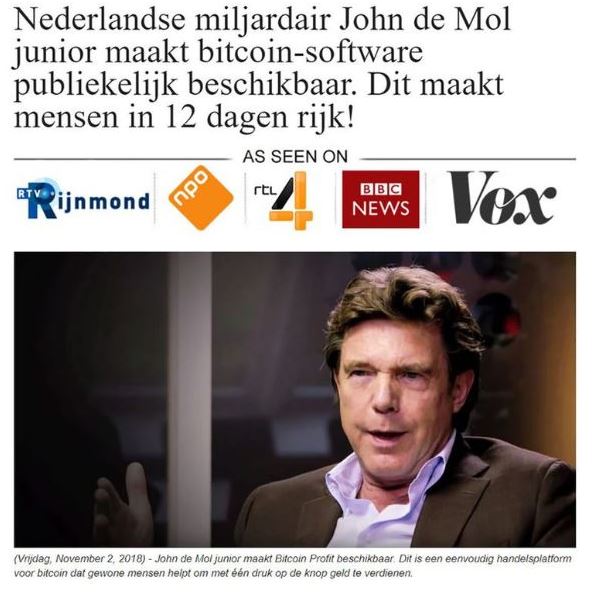 Active role required from Facebook with regards to fake advertisements

The number of Facebook users was estimated at 2.3 billion early 2019. This makes the medium an ideal platform for advertisers. Facebook therefore makes high turnover, last year the advertising revenues alone were estimated at around 45 billiondollars. It is no surprise that Facebook is also used by individuals with less honorable intentions.Since 2018, advertisements to invest in Bitcoins are very commonly seen on Facebook. In addition, Dutch media tycoon John de Mol is depicted as a successful Bitcoin investor, however these adds are a scam and lead to fraudulent websites.

John de Mol demands a ban on the use of his name or face, for which he has not given permission. He claims that Facebook should act actively to prevent this.

Many victims of this scam have reported to the online Fraud authorities, who estimated the damage caused by these fake advertisements at 1.7 million euros. Facebook's argues that it is not responsible for this. They claim that they’re just a neutral online channel and therefore not liable for fraudulent ads on the platform (the so called safe harbor defense).

Court does not agree with this especially taking into consideration the active role of Facebook in selling sell ads on Facebook and Instagram. Facebook appealed the decision. Wondering who will support John de Mol, because now fraudulent Bitcoin ads are appearing on Facebook portraying other celebrities. (Source image: fake ad on Facebook)