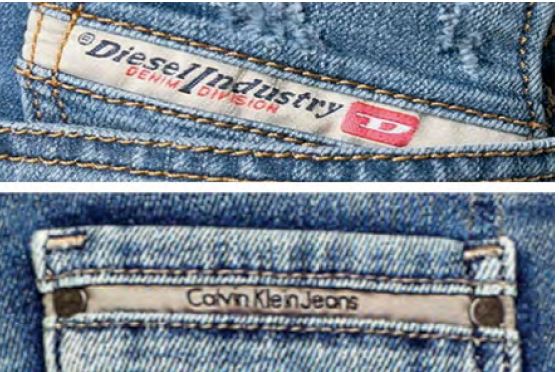 Diesel has a design for its jeans with a small pocket on top of the right front pocket, the so-called coin pocket. Diesel has applied a small diagonal stripe to this small pocket. Just as Levi's sees its red vertical tab as a trademark, Diesel uses this slanted strip as a vital part of its branding too. In order to protect the rights, it applies for a position mark.

The validity of this position mark is central to a conflict between Diesel and Calvin Klein. Calvin Klein argues that a simple stripe cannot be a trademark. The public sees this as banal decoration.

The Court disagrees. This is not a simple stripe, but a strip that is applied in a special place. Such a strip can often be found on all other jeans, but then horizontally at the top. Due to the diagonal placement, the consumer will see this as a identifying mark. The trademark is upheld for Diesel.

There is no question of infringement by Calvin Klein, because they (like the rest) use a horizontal stripe on their coin pocket. The marks are therefore not deemed visually similar.